Moodle HQ at EduTECH Australia 2018. Why were we there, what did we achieve and what’s next? Between 7-8 June 2018 edtech enthusiasts gathered in Sydney Australia for EduTECH Australia, the largest education exhibition in Asia-Pac and the Southern Hemisphere.

Amongst these education and technology experts were our team from Moodle HQ! We were there as part of a new initiative to take an active role in major edtech conferences worldwide.

It’s our aim that our presence at conferences will give us the opportunity to speak directly with the edtech community about our latest features and upcoming Moodle initiatives. By attending events such as EduTECH we at Moodle HQ are also able to educate attendees about our Moodle Partner network.

What happened at EduTECH Australia?

Throughout the 2 day exhibition Martin and the Moodle HQ team had the opportunity to speak to hundreds of delegates. From long-time Moodlers, to people who had only heard of, but never used the platform. EduTECH Australia gave delegates the opportunity to meet the people behind Moodle .

Speaking about EduTECH Martin said: “Attending EduTECH Australia was a great experience and we would like to thank everyone who stopped by the Moodle stand to speak with us. It was wonderful to get feedback from our community and educate people who are new to Moodle.”

In addition to providing on-site demonstrations of latest Moodle Mobile and Desktop Apps, the Moodle HQ team also were able to explain in detail Moodle’s benefits, such as offline capabilities, with delegates.

On the Thursday evening we invited EduTECH attendees and local Moodle fans to an exclusive Moodle event at the nearby Shelbourne Hotel. The event was sponsored by our Australian Moodle Partners (Catalyst, eCreators, Moodlerooms, and My Learning Space).

There attendees were able to meet in a relaxed atmosphere, to have a conversation with Moodle Partners, Martin and members of the Moodle HQ team.

What’s next for Moodle HQ?

After the success of Moodle’s presence at EduTECH Australia, we’re looking forward to continuing our mission to empower educators by attending global conferences.

Stay tuned for more information about Moodle HQ attending EduTECH Asia, EDUCAUSE (USA) and Online Educa Berlin. You can do this by: 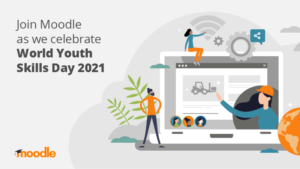